Our family would like to welcome you to Villa Valmarc, situated on Mahoe Bay in Virgin Gorda, British Virgin Islands with its pristine beach and spectacular coral reef.

Villa Valmarc is surrounded by lush flower gardens and a variety of fruit trees, any of which are delightful to enjoy with your sunset beverage while taking in the ocean view.

A short stroll down the path leads you directly onto Mahoe Bay Beach for some of the best swimming and snorkeling Virgin Gorda has to offer.VIEW GALLERY 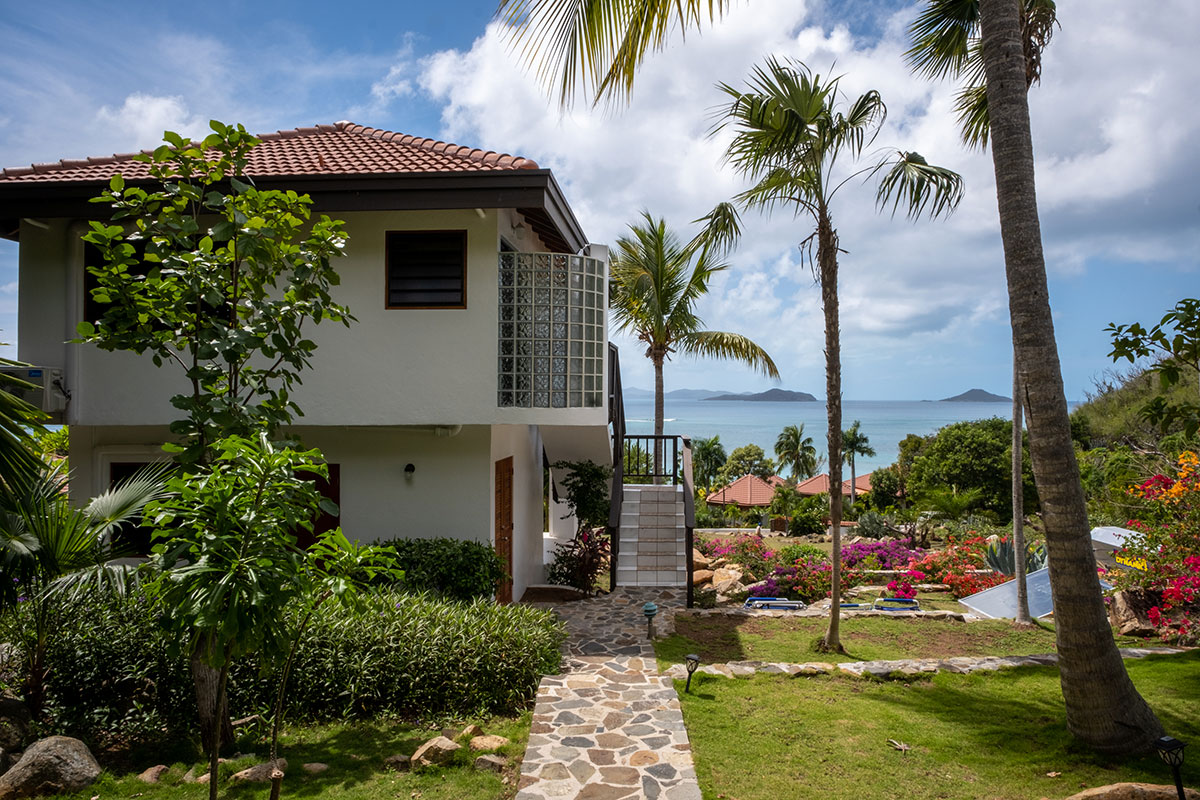 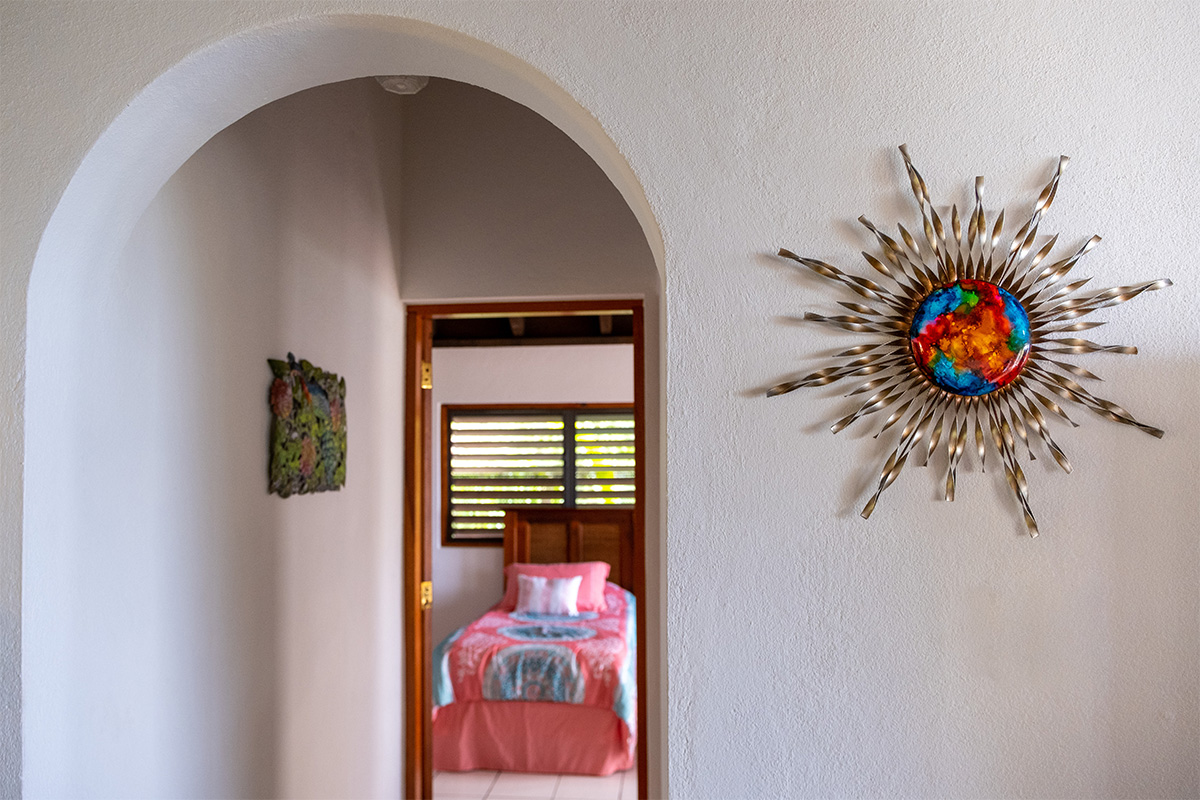 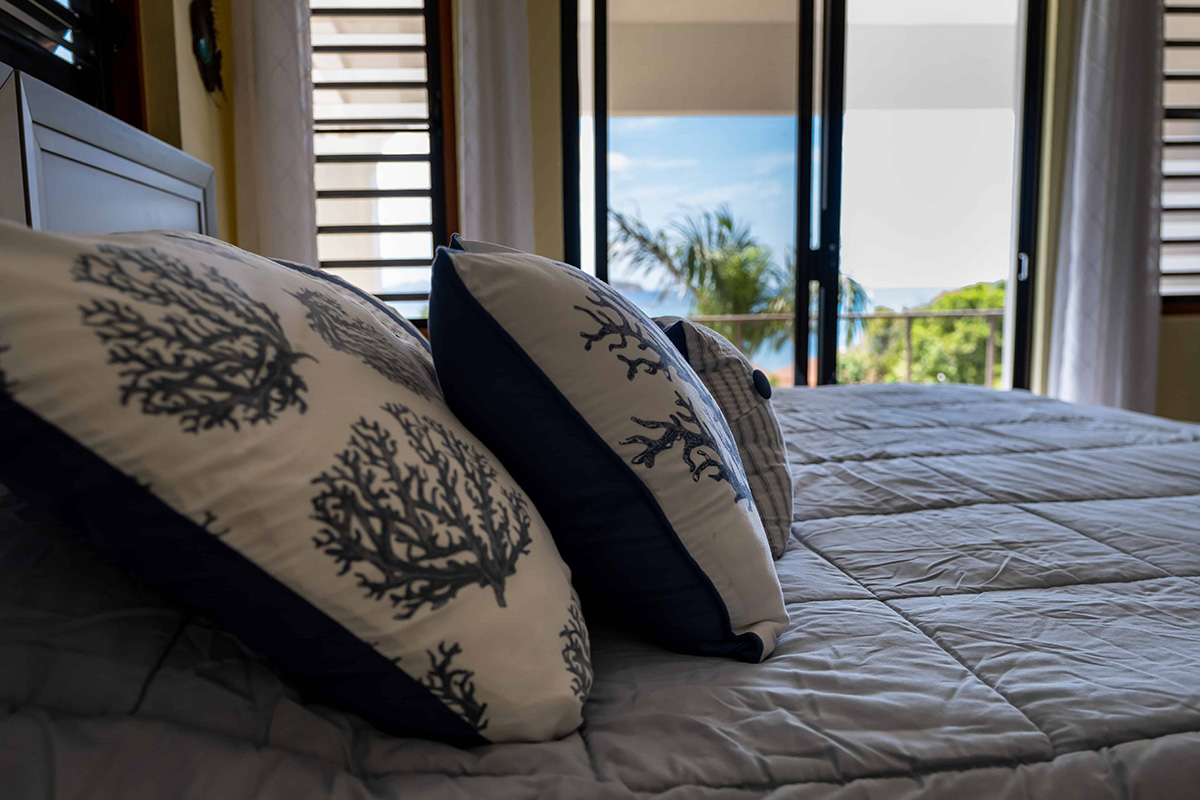 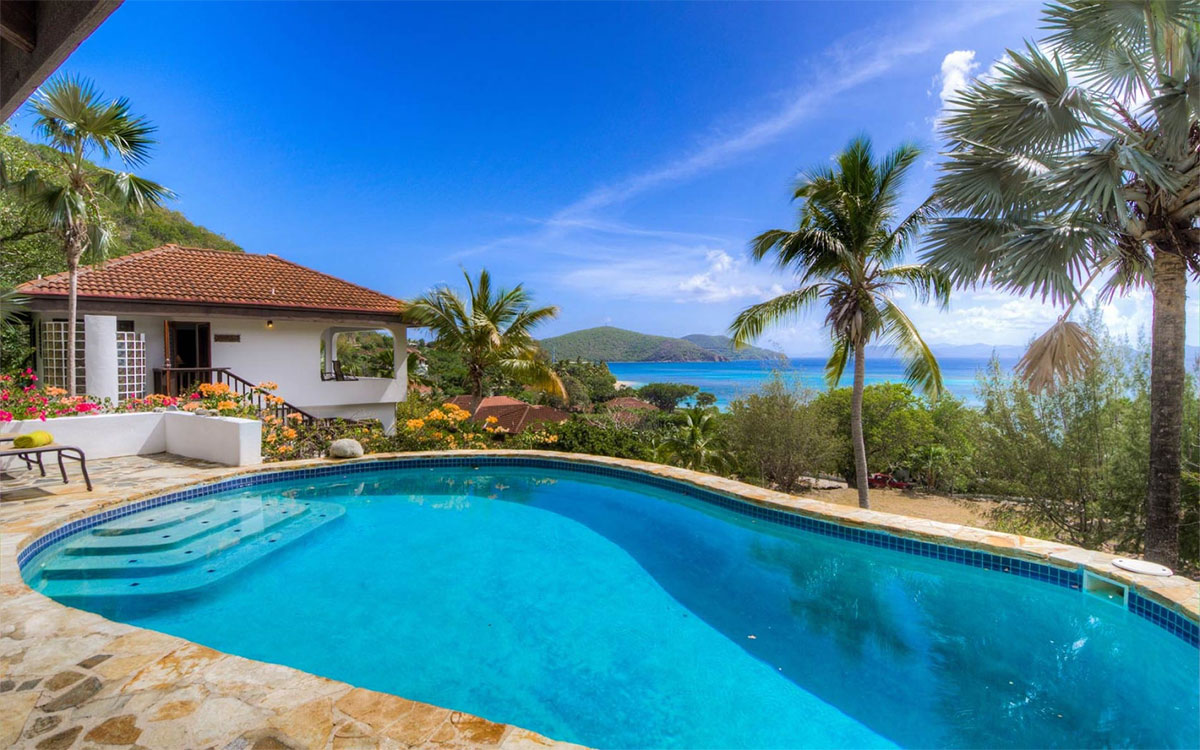 Take a Step Inside Villa Valmarc

Set in a lush garden with the best views of the islands & a few minutes’ walk to a pristine beach.
The private villa has two free-standing pavilions with four tastefully decorated bedrooms and outdoor living areas with a relaxing freeform pool.

From Our Beloved Guests

Our group had visited three other islands and we agreed that this is our favorite! We loved you beautiful home and our week on the island was very memorable. We will return!

Views of the sea and islands are outstanding from every room, each of which is furnished to a very high standard. The kitchen is fully equipped and appliances are all well-functioning. The pristine beach is a two-minute walk. The island is as beautiful and peaceful as ever, with much better restaurants and bars than it had when we first started going to Virgin Gorda.

Thank you for sharing your home. It made our vacation unforgettable. Your deck and spectacular views were the launching spot for scuba, snorkeling and sailing adventures.

Villa Valmarc is steps away from a remote and pristine Mahoe Bay beach. You will be captivated by its crystal-clear blue waters, gentle waves, pure white sand and relaxing palm-trees and seagrape.

Traveling from the USA / Canada

From San Juan (SJU), it’s a short flight over to Virgin Gorda. (VIJ) As a major international airport serving the Caribbean, San Juan is an easy destination from most countries.  US Air, Delta, Spirit, Air Canada, West Jet, United, Jet Blue and many other regularly scheduled, charter and discount North American airlines have direct flights to SJU.

Alternative flights to St. Thomas (STT) in the USVI may be available, with a ferry or flight to Virgin Gorda.

A convenient option is flying direct from San Juan to Virgin Gorda on Air Sunshine or Silver Airways.

Charter carriers such as Fly BVI, Virgin Gorda Air Charters and Island Birds also make the flight to Virgin Gorda during daylight hours. Booking with a charter carrier can be an economical option if you have a group of five or more people arriving at the same time into San Juan or St. Martin.  You have the added bonus of a plane waiting for you (even if your aircraft is late).

St. Martin (SXM) is a major destination for many European carriers.  FLY BVI can take you from St. Martin to Virgin Gorda.

Upon arrival at your port of entry on Virgin Gorda, you will be met by our onsite manager, Heather, along with your car rental company and you will be guided to the villa.

Bedrooms: 4 with air-conditioning & complimentary safe in each room.

Bathrooms: 4, with 2 of the bathrooms including outdoor glass-block showers.

Port of entry pick-up: Meet & greet at airport with keys and car rental.

Concierge: services are available upon request, including:

Virgin Gorda is a safe and quiet island with a welcoming community and all basic necessities, including:

Hospitals: Virgin Gorda has a medical clinic that will help with minor incidences, allergies and prescription re-fills. For more serious incidences, Road Town, Tortola, the main BVI island, has Peebles Hospital as well as numerous clinics.

Banks, ATM + Currency: The official currency of the British Virgin Islands is the United States dollar (US$). Credit and debit cards are accepted in all restaurants however cash is also appreciated, especially for tips. If you forget to bring cash with you, the island has a bank and an ATM machine.

Water safety: Many locals and tourists drink the local tap water with no harmful effects. Of course, bottled water is readily available at the grocery stores.

Virgin Gorda has a wide variety of restaurants and bars on the island ranging from Japanese fusion to local Caribbean cuisine. Some of our family’s favourites are:

Virgin Gorda is the ideal retreat for those looking for a quiet vacation away from over-urbanized islands that cater to cruise ships.

Yoga, snorkeling, running, hiking, SUP (stand-up paddle boarding), cycling – there is plenty to do on the island and we would be happy to help with finding your ideal sporty way to enjoy Villa ValMarc.

For watersports, here are some of our families favourites:

Virgin Gorda has plenty of outdoor adventures for you to explore including: The Baths, Spring Bay National Park, Savannah Bay, Gorda Peak National Park, The Copper Mine, and North Sound.

If you’re in the mood to explore ocean ruins or surrounding islands, boat charters are available for groups small and large. Here are a couple of the best options Virgin Gorda has to offer:

The best time to visit

All year around! The most popular season runs from December to April, since it is the least rainy period of the year. January through end of March are the driest months and the least hot of all.

In summer, June and July are generally less rainy than August and September, they also have a lower risk of tropical storms and hurricanes, which are most likely to threaten between August and October.

January to April is a relatively dry season and a rainy season from May to December. The least rainy months, when precipitation doesn’t go above 50 millimetres (2 inches) per month, are February and March.

In April and May, there is an increase in rainfall, although there is often a relative decrease in June and July, followed by a recovery from August to November. Generally, the rainiest period is from September to November.

Note: it’s not unusual to see a report that there are showers predicted for each day of your stay.  Do not be alarmed. Typically there will be showers somewhere in the BVI sometime during the day, but the islands are all semi-arid and the chances of prolonged rain lasting more than ten minutes is quite remote.  Just in case, be sure to ask about our exclusive Villa ValMarc rain guarantee when you book. 😉

Follow us on social media to keep up-to-date with latest news, discounts and events.